I’m sure most of ya’ll have seen our newest addition Waffles. She is an English Cream Golden Retriever and we are completely in love. With our decision to retire Bella we decided to go ahead and start looking for our next mama. After much thought we decided that we wanted to looking into adding Goldendoodles to our program. Two people in my family have goldendoodles and we love them. I started with a lot of research. I knew almost nothing about Golden Retrievers going into this much less that there was such a thing as an English Cream Golden Retriever. Through my research I saw a few pages comparing American and English Golden Retrievers. Curious I read them. One of the things that I love about Labs and Labradoodles is the balance of their bodies. The front half and back half of their bodies are proportionate and they have a level topline.(I think it might have something to do with being in the Livestock industry and taking Evaluation Classes in college…what is the first thing you look for, balance..) American Goldens are built more like a German Shepherd their backend sits lower than the front end and doesn’t look quite balanced. They have a smaller frame and tend to be dainty looking in the face. Then I saw an English Golden. They are bred to British breeding standards and they are balanced, level topline, and a blocky head. Not to mention that gorgeous cream coat that most come in. Then after more research I found the English Golden had a 23% less chance of getting cancer than American goldens with cancer being the number one killer of goldens. They also live an average of a year and seven months longer. English Goldens also have a more calm temperament and tend to be less hyper all the time. After finding out all of this I was completely sold. Then the only thing was to find a good breeder that will sell to breeders. I searched for a couple of weeks before finding the perfect one. We have decided to only buy champion bloodlines and from health tested parents. Golden Retrievers also carry hip dysplasia bad so finding parents that had high rankings was a challenge. Then I found Waffles. She was just born. The only picture I saw was a group photo but both her parents had Excellent hip ratings which is only the top 4% of all golden retrievers and dripping in gorgeous. Her grandfather was imported from Russia and is also owned by her breeder. After talking with her breeder I knew this was the litter I wanted to put a deposit on. It was the longest 6 week wait ever to pick out my girl. I don’t know how anyone who puts a deposit on one our puppies waits 3 weeks. I was ready to pick as soon as she put up their first individual pictures. It was a cuteness overload. I couldn’t wait to share her with ya’ll. She flew all the way from Illinois and has been the happiest sweetest ball of fluff. Once she had landed and was safely here I had to share her. I can’t even begin to tell you how excited we are about her and what she is going to bring to our breeding program. 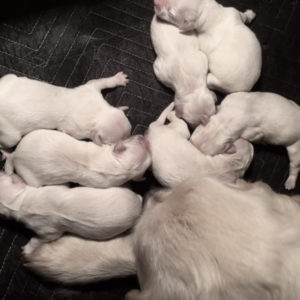 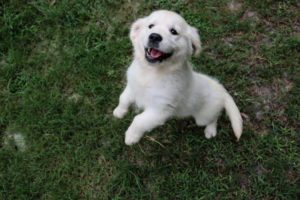 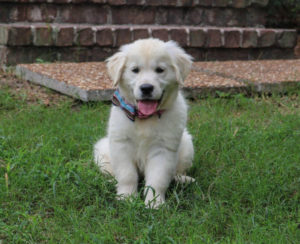 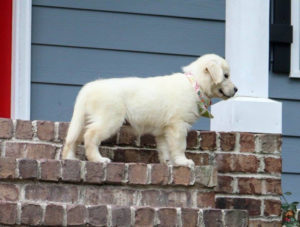 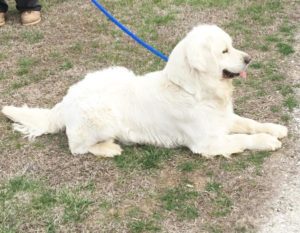 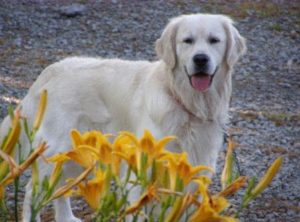